I found this on my phone. It was written in April

Hi guys!
Exams are over wohooo!!! I am still waiting for most of my results so keep me in your prayers.

Special thanks to everyone who helped me out especially those who are keeping my stuff(Muizz you’re the real MVP), Marissa for coming out to help me by 8:30am and Frieda for always being there for me 24/7 and coming with me to the airport. Kate for helping me finish moving, and all those who wanted to help but couldn’t make it! You’re all so awesome. And then I stopped writing. So here I am in September 2015 continuing the post 🙂

So recap of my Ottawa post, I was there for 9 days but I couldn’t get my passport because the printing machine for passports broke down and apparently, they realized that AFTER ALL THE NOISE THEY MADE ABOUT MY FINGERS AND THE FACT THAT I NEEDED FINGERPRINT EXEMPTION, I ACTUALLY GOT FINGERPRINT EXEMPTION 5 YEARS AGO!! Sorry for the Caps, I was just so pissed.

Anyways, I didn’t go out much. LOL. Shoutout to Maxine for giving me a place to stay, doing passport wahala(trouble) for me and feeding me so well!!! like I went out and I was like I prefer Maxine’s food. hahaha.

My trip was like a mini vacation, like a super chill break. I got to see Dior, yay and despite being with Maxine 24/7 for over a week, it did not dawn on us to take a picture together, Lol. Here’s my picture with my friend Dior 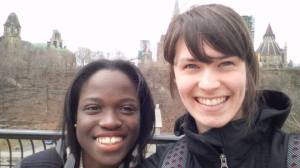 I spent my days watching How to Get Away with Murder(Thanks to Air Canada who made me start watching it on the plane) and I went to St Patrick’s basilica, Notre dame Cathedral and Parliament Hill. I also steamed my hair for the first time in Canada at some hair salon 🙂 And on the last day we walked around downtown and stuff. Unfortunately, most high quality pictures were taken with my camera and I have lost my USB so I wont putting up most pictures of the trip 😦 (They weren’t that many anyways)Notre dame and St Patrick’s were so breath-taking!! Anyways, here are some random pictures I took with my phone/tablet 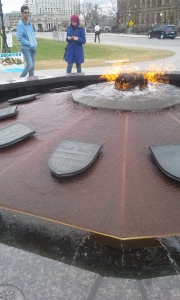 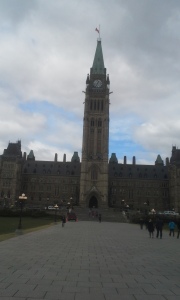 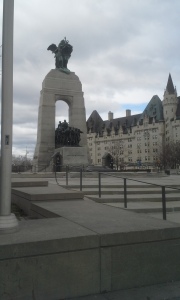 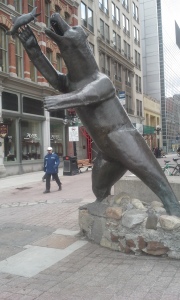 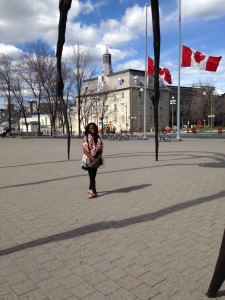 Thanks Maxine! You’re the realest MVP. I had the best time with you!

After Ottawa, I came back to Metro-Vancouver, Richmond actually in the evening and I didn’t know what to do with myself. Lol, because I had to be on the first flight out to Calgary in the morning and I didn’t want to go too far from the airport. I decided that the best plan was to go to St Paul’s parish Richmond and attend a talk there(The talk was awesome, I will make a post about it!!) and stay in the 24/7 adoration chapel till morning and call a cab to take me to the airport. That way I dont have to pay for accommodation for a few hours and my cab fare will be cheaper. LOL As a true Ijebu girl.

But God had other and obviously better plans! He sent an angel Sheena to give me her house to stay in! And dinner and breakfast and she woke up early in the morning to drive me to the airport, Can I just say that you superwoman Sheena are definitely not human, you’re an angel disguised as a human being! Thank you so much!!! I really did not think that anyone can go out of their way so much. Actually Sheena is my “ate”(Filipino term for big sister, Can I be Filipino now? You know I am already North Korean 😉 PS Apologies to anyone reading this who doesn’t get my North Korean joke) So thank you so much Sheena for all that you do for me, I really really appreciate your kindness.

So in Calgary, I didn’t go out much too because it was my time of the month. And Seyitan was in Vancouver.LOL so I didnt have anyone to go out to meet and there were lots of people at home. So it was part 2 of my vacation and there was Netflix. Outdoors, what is that? LOL I watched Commuinity and some Nigerian movies. Back to it being my time of the month.Oh my goodness! It was the worst pain that I have ever experienced especially as it was the first time that I had my period since my doctor put me on the pill for serious medical reasons(Story for another day). I actually felt like I had an abortion or something like that because I was bleeding so heavily and it was painful. I also couldn’t go to the hospital because of insurance issues so I started taking ibruprofen every four hours. Like after four hours, the pain would return so I took the drugs faithfully. I really wanted to go home for Christmas and see a gynecologist who would take me off the pill and still solve my problems.

I only recollect going to St Albert the Great parish for weekday mass once and I followed my family friends to a protestant service on Sunday. It was actually fascinating, they had holy communion and wine. Can someone educate me on the protestant interpretation of John 6? I only know the Catholic beliefs and I would love to know how non-Catholics view it. It just reminded me about how we are actually all Christians in the end even though I dont remember the sermon that day. I just remember that they had communion and I saw an interesting magazine in the lobby 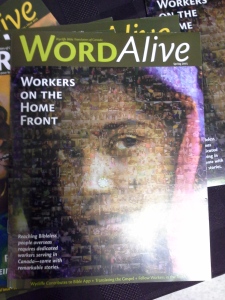 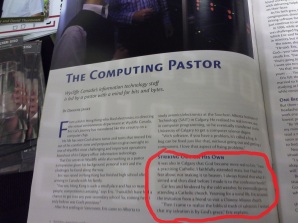 The front view and the article inside

All I could think was LOL. And then I realized how sad it was that people actually think like this.

The Church service that my family friends attend usually takes place in a St Isabella Catholic school, and the theme for their board was ‘Hope’ and yeah I had to take pictures 🙂 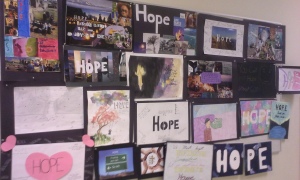 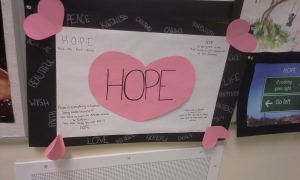 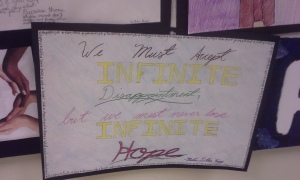 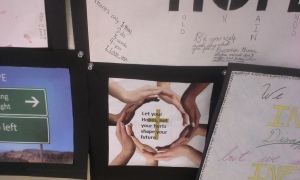 I was too scared that I would run into Agnes or anyone that I met last year so I didn’t go to the Cathedral or St Bonaventure or my favorite Calgary parish, St Anthony of Padua. I went to St Albert the Great parish. 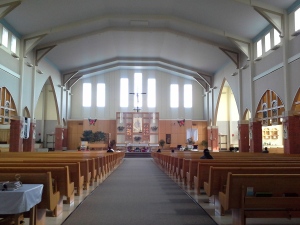 I liked it, I did not run into any fanatics that wanted to recruit me. LOLLLL. (I am sorry for the constant bad inside jokes in this post people!) Anyways, you can thank your stars because it’s all over. For real, I am done with my April Update. Praise the Lord!

Hello, I am F.T....short for Fehintola. If I am asked to describe myself in three words, I will say that I am F.O.J- friendly, outgoing and joyful OR Fehintola Okunubi Josephine.